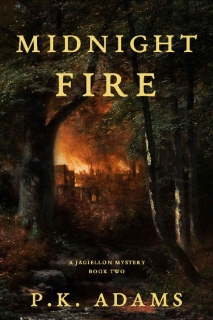 In the summer of 1545, Caterina Konarska undertakes the long journey from Bari to Kraków in search of a cure for her ailing son Giulio. In Poland, she finds a court far different from the lively, cultured place she remembers from twenty-five years ago. The old king lies on his deathbed, and the once-charming Queen Bona has aged into a bitter, lonely woman—isolated from power and estranged from the heir, Zygmunt August.

Haunted by memories of a crime she solved long ago, Caterina approaches the queen with caution. Bona promises medical assistance for Giulio, but at a price: Caterina must travel with her son to Vilnius where, in exchange for a medical consultation with a royal physician, she will attempt to dissuade Zygmunt August from marrying his scandal-ridden mistress, Barbara Radziwiłł.

Caterina agrees, but she soon learns that Zygmunt August listens to no one, especially when it comes to his love life. And when a puzzling murder shakes the Vilnius court, the duke immediately suspects his mother’s agents. Caterina is thrust into yet another investigation, but as bodies and clues pile up, she realizes that in trying to clear the queen’s name, she has placed her and Giulio’s lives in grave danger.