Mentored in Fire by K.F. Breene 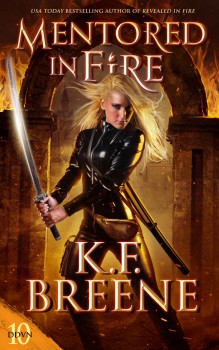 After a life of hiding and laying low so as not to end up trapped in the Underworld, that’s exactly where Reagan finds herself.
It could be worse, though. She could’ve had a hostile father as her jailor instead of a man eager to teach her magic. She might’ve been trapped with someone other than the steadfast Druid.

She could’ve gone her whole life without riding a dragon!
When push comes to shove, maybe the Underworld isn’t so bad.
Or maybe Lucifer is doing what he does best – deceiving her to get what he wants.
Reagan must walk a razor thin edge to keep her independence.
She must battle wills with the lord of the Underworld.