Mark of Justice by Robin James 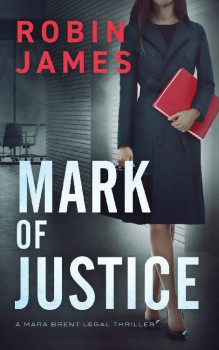 What he did to her…
As Maumee County, Ohio’s top prosecutor, Mara Brent has faced down killers before. But the murder of Haley Chambers is different. The evidence left behind at the crime scene paints a horrifying picture of Haley’s last hours. Her killer took his time. Planned. Hunted. Executed.
No one will believe it…
When local mechanic and family man, Cal Emmons is charged with the crime, the town rallies to his defense. Everyone knows him. Everyone trusts him. His supporters bring their protests right to Mara’s front door. But they don’t know. They haven’t seen what Mara and the police found at his house.
But there is one more victim out there…

The police connect physical evidence in Haley’s murder to a cold case abduction. Only that victim lived. Her harrowing, firsthand account of what she endured haunts Mara and provides a Rosetta Stone for Haley’s murder. But Mara’s star witness never saw her attacker’s face. She has lied to the police before. Is she lying now?
If Mara loses this one…more will die.
To win, Mara must ultimately step inside the mind of a sadistic killer. But this time when evil touches her, it may not let her go.