Mark of Fate by KT Webb 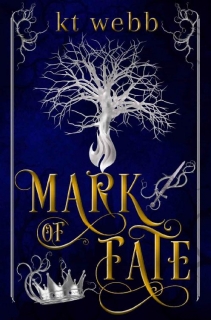 RAISE A KING TO KILL THE QUEEN
Legacy would not survive her destiny . . .
. . . at least, that’s what she believed.
But would her survival mean the destruction of the three kingdoms?
At a young age, Legacy accepted her fate. It was all she knew. And becoming Queen of the Kingdom of Man was only the first step toward meeting the fate she dreaded since her sixteenth birthday. But fate is a fickle fiend and now that Legacy wears the crown, she must face threats she never knew existed in the form of her own sibling.

As Legacy searches for a way to unite the three kingdoms before the Shadow Mages claim control over Alderwood forever, she works with new allies to unravel the darkest secrets held by King Junius. The more she discovers within the castle walls, the more she realizes her father was merely a puppet of the Shadow Mages.

Every heinous crime and unspeakable action created a ripple effect that destroyed the lives of countless innocents along the way and now threatens to destroy them all.
When the moment comes to face the enemy once and for all, can they work together to free the wild magic and save Alderwood?
Or will Legacy lose herself and those she loves to the darkness forever?