Marcos Betrayal: The Secrets of The Orb by M J Anand 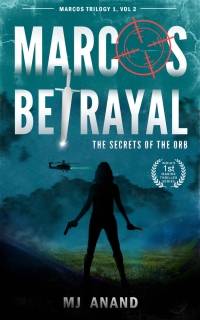 It is not the enemy you see but the one you don’t see that frightens you often. Unlike the hot bullets that tear through the muscles, the cold winds of spy-craft crawl under your skin and create wounds that eat you from inside. Before you perceive it, the walls are already closing in on you. It’s too late.

Abhimanyu had found the lead that could help him uncover the wounds hidden under the skin, or so he thought. It didn’t matter for the lead died before Abhimanyu could make his move. The Orbs have surrounded them and the Indians are yet to see it.

The Indians put everything on line to get their hands on another lead that could help them avert a deadly covert invasion. Lo and behold, they escape death and have their firm grip on the lead that will solve their problems, or so they think, again. In a game of cat-and-mouse with a mysterious enemy, the Indians struggle to stay ahead. Will they find the secrets of the Orbs or let the Orbs encircle them beyond rescue?