Man Of My Word by Robert Enright 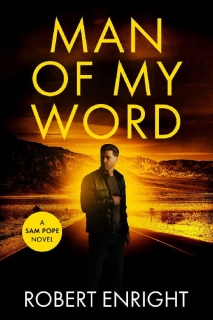 Alex Stone saved Sam’s life.
On a cold, rainy night in Rome, Alex had arrived just as Sam was about to be executed. With his life in the balance, she had gone on the run with him, nursed him back to health and gave him a chance to fight back. A chance he took to bring down Wallace, Blackridge and the truth behind Project Hailstorm. But Sam had made Alex a promise.

The US Government had used her family as leverage to control her and as Sam had headed home to fight his battle, so had Alex. Desperate to be reunited with her siblings, Alex was willing to do anything to get them back. And that desperation had led her to the Death Riders, a notorious biker gang on the cusp of a war with a local drug lord. With the DEA watching every move, Alex’s desperation has taken her to a dark place.

With hell about to break loose, Sam Pope’s journey to find her will put him at the centre of the chaos and he will have to go to extreme lengths to prove how much keeping his promise truly means.