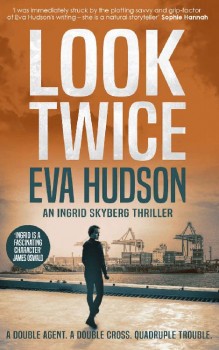 A double agent. A double cross. This time, Ingrid is in double trouble.

When Special Agent Ingrid Skyberg discovers an undeveloped roll of film left behind by her predecessor in the FBI, she isn’t sure what to make of the strange photos he took. A map of Scotland, an out-of-print book, a rare bird, a cluster of Post-It notes, an office party… do these images have something to do with crimes he committed as a Russian double agent known as ‘Skylark’?
Ingrid starts digging and becomes convinced that – far from being a traitor – her predecessor was just another victim of the mysterious Skylark who has killed many times to protect his identity. When a case file she has been using is suddenly deleted from the system, Ingrid knows that Skylark is now watching her… and the race is on to find him before she becomes his next victim.

Look Twice is a high-octane spy thriller that will have you on the edge of your seat, flipping the pages to find out if Ingrid can survive her most ruthless opponent yet.