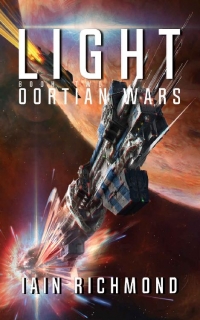 Captain Jack Falco and the crew of the Anam Cara narrowly escaped the Oortian forces. The United Nations Navy lost thousands of souls and every starship beyond Mars fending off the Oortain attack. Moon-sized vessels tore Pluto from her orbit and drug her into the enemy’s vast camouflaged field as Falco and his crew destroyed humanity’s greatest achievement, Space Station Pluto, in a desperate move to slow the Oortian advance.

It’s been three years rotating a skeleton crew in and out of hiber-sleep on the long-haul back to earth. The Anam Cara receives a ‘CODE BLACK’ message ordering Falco and his crew to rendezvous with Admiral Hallsworth at a covert location near Jupiter.
With the hint of a new powerful ally, Captain Falco and the UN could be back on the offensive to protect the Solar System from the expansion of the Oortian civilization… but with each Oortian loss, the Darkness learns and evolves.

What Falco and the UN will face on their return to the Kuiper Belt will be unlike anything they have seen before.