Letter From The Dead by Jack Gatland 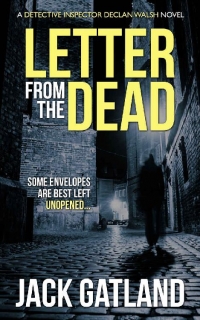 “By the time you read this, I will be dead…”
A twenty year old murder… A Prime Ministerial Leadership Campaign… A paranoid, homeless ex-minister… A TV Evangelist with a murderous secret…
Detective Inspector Declan Walsh has had better days…
Recently blacklisted from the police for punching a priest on live TV (long story), D.I Declan Walsh is one step away from quitting the force for good – and privately investigating the mysterious death of his father, Chief Superintendent Patrick Walsh, who died shortly after writing a tell-all memoir of his time on the force.
But when his father’s old partner, Detective Chief Inspector Alex Monroe arrives with an offer, Declan is forced to take it. For Monroe now leads a City of London task force that concentrates on cold cases, and filled with officers just like Declan; officers that are too valuable to lose, but at the same time have a history in the force. Nicknamed ‘The Last Chance Saloon’, it’s currently investigating a decades old murder – and one that Declan’s father supposedly solved.

When Victoria Davies was pushed off her stately home’s roof in 2001, all evidence pointed to her husband, Michael. But now, twenty years later a letter has appeared, written by Victoria before her death; a letter that was never received, and a letter that brings new suspects into the fray; Labour MPs Shaun Donnal, Andrew MacIntyre and Charles Baker.
But two decades on, life has changed for these men. Donnal is now a paranoid alcoholic living on the streets of London, ‘Andy Mac’ is a popular YouTube Evangelist and Charles Baker is the current Conservative Secretary of State, and the bookie’s choice for next Prime Minister in the upcoming Leadership Election.

Now Declan and his new team must navigate a minefield filled with political intrigue, adulterous affairs, money laundering aristocrats and brutal, bloody murder, as each suspect leads them to a new problem and another skeleton to fall out of the closet.
And at the same time, as he investigates Patrick Walsh’s death, Declan learns that not only was his father connected to an old school London crime family, but also that Patrick (and by default Declan’s new boss, Monroe) might not have been as clean as people believed…