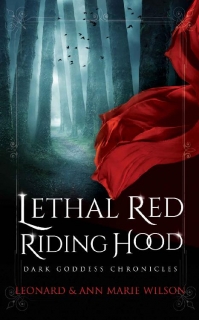 Bloody Scarlet, the skull collector of the Crimson Forest, is just a cautionary tale to keep children from wandering in and getting lost — isn’t she? Well something’s out there.In a world dominated by a cruel Inquisition that sees demons and witches everywhere it turns, Keely just wants to make a dishonest living convincing the obscenely wealthy to part with their excess riches through guile and trickery.

When the Inquisition shows up to destroy her life anyway, Keely goes on the offensive rather than scurry back into the shadows. To set it up for a fall she lures the Inquisition into an invented race to find a heretical book of prophecy that may never have existed.

When Keely builds her lies on existing rumors, though, and points the hunt in the direction of the Crimson forest, a new player introduces herself to the high stakes con game as a deadly wild card.Whether or not the woman in red is the real Bloody Scarlet, the closer Keely gets to the dark, twisted heart of the forest the more quickly things spiral out of control.