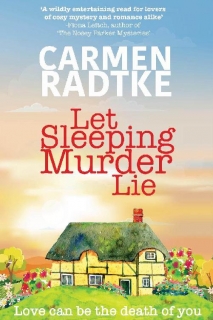 Love can be the death of you …
American Eve Holdsworth is living her quintessential English dream in a picturesque village in the countryside. Meeting an attractive stranger adds to the appeal.

But Ben Dryden is a pariah in Eve’s new neighbourhood, since his wife was murdered five
years ago, and he was the only suspect. Eve, who is absolutely sure someone as charming as Ben could never be a killer, is determined to solve the case and clear Ben’s name, even if it’s against his will.
Soon enough Eve finds herself in deep waters, and with her life at stake, she can only pray that her romantic notions won’t be the end of her …