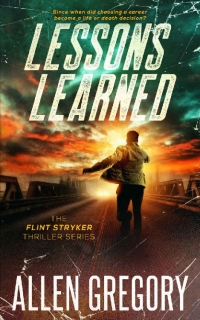 Murder, kidnapping, and involvement with a secretive “off-the-books” organization that deals with unusual domestic terrorism sounds like an interesting career choice, right?
But suppose you want nothing to do with it?

Perennial party animal and long-overdue college graduate Flint Stryker discovers that choosing a profession would be like nothing he ever imagined. Gifted with a unique special ability that puts him on the radar of two mysterious organizations, Flint had no idea a hard-partying slacker would be in such demand.
It all happens in one strange day, a day filled with opportunities, dangerous deceptions, secrets revealed, a painful choice, and an unexpected outcome, that puts Flint Stryker on a collision path with danger, death, and ultimately – retribution.

Since when did choosing a career become a life or death decision?