Legacy of Lies by James Harper 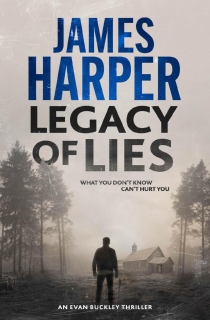 A godless cult long since forgotten.
Unspeakable crimes as yet unpunished.
And an unholy legacy to unite them.

TWENTY YEARS AGO, Detective Kate Guillory’s father committed suicide. Nobody has ever told her why.
She’s been afraid to ask.
Not any longer.
Now a man is stalking her, and she’s got a nasty premonition that he knows more about her family’s past than she does.
With her sanity stretched to breaking point and her self-esteem at a dangerously low ebb, PI Evan Buckley calls a temporary truce with her partner Ryder, setting aside their long-standing animosity in the hope of discrediting the mounting evidence that points to the unholy secrets of Kate’s legacy.
The search takes him to the coal mining mountains of West Virginia and the hostile aftermath of a malignant cult abandoned decades earlier.
As he digs deeper into the unsolved crimes committed there and discovers the stalker’s bitter grudge against Kate, one thing becomes horrifyingly clear – what started back then isn’t over yet.

And the more he unearths, the more he gives the lie to an oft quoted maxim – what you don’t know can’t hurt you.