Learning to Spell by Lynn Ericson 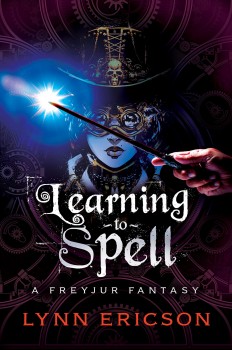 The Lovelace Community College of Applied Magic had always been Sylvie’s dream. She would attend. She would excel. She would become one of the most accomplished alumni to ever walk its halls. But her acceptance letter never came because of one infuriatingly stupid little problem: Lovelace didn’t exist.

Sylvie had lived so much of her childhood vicariously through the books and the movies it felt real. Anything that felt that real should exist. But no. The most magic her life can muster is volunteering at a fantasy convention for a chance to meet Diana Taylor, the actress who starred in the Lovelace movies.
Then everything changes when Diana invites Sylvie up to her room and introduces her to new possibilities that have nothing to do with spending the night with another woman. Well, okay, they could. Or maybe they could involve her pick of two or three intriguing men.

The point isn’t that so many of her new possibilities are lascivious. The point is magic doesn’t have to be at all what she expected for it to be real.