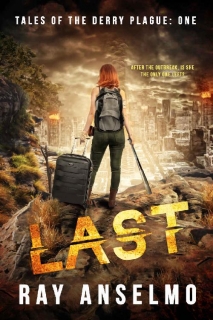 One Monday morning, Kelly Sweeney called in sick from work. A week later, her world was gone.
Kelly, a grocery store manager in tiny Sayler Beach, California, just thought she had a bad case of the flu. But when she recovered, she found everyone else in town dead, and days-old news reports of a rapidly spreading pandemic. There’s no way of telling if anyone else has survived anywhere. Soon the power and water go out, and she’s left to scrabble if she wants to survive.

She’s tough and practical, and she has an entire town’s resources at her disposal. But she’s also facing a long series of new challenges, from disposing of bodies to preserving food to dealing with packs of newly feral dogs. That’s in addition to keeping the balance in her own brain, which has been a lifelong struggle.
And as she works to find food, to stay clean, to stay sane, to figure out what happened, and finally to search the world outside her hometown, the question hangs over her head: of all of humanity, is she now the LAST?