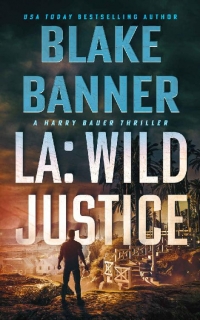 Billionaire philanthropist, Senator Charles Cavendish,is head of the renowned Cavendish Foundation, known for building schools and hospitals in Third World countries, and for sponsoring clean water, vaccination and sanitation projects to help vulnerable kids and communities the world over. He is one of the ‘good guys’.
And Cobra has decided he must die, and Harry Bauer must kill him.

He must die because he is evil. His foundation is a front for arms dealing and his support for terrorist groups, who pay him in oil. Bauer is skeptical, but when he learns that Cavendish supplied Mohammed Ben-Amini with the chemical weapons to wipe out the village of Belandhawa, in Helmand province, his skepticism turns to murderous anger.

The problem is, Cavendish lives in an electronic fortress in Pacific Palisades; Bauer can’t get close to him, and when he tries to use Cavendish’s beautiful, naïve assistant, Sheila Newton, things start to unravel badly. Suddenly Bauer doesn’t know who is his enemy, and who is his ally.
But one thing is clear, when Harry Bauer is out for blood, whoever his enemy is, they’re on the wrong side…