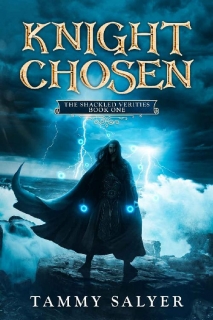 Ulfric took an oath to protect his world. But will it mean losing everything he loves?
Weary of leadership and everlasting existence, yearning for life anew, Ulfric Aldinhuus plans to renounce his immortal spark and his oath as a Knight Corporealis of Vinnr to become a simple commoner once again. Ordination into the Knights is an honor few are chosen for and even fewer accept. But he has lived far too long to care about honor anymore.

He just wants his freedom, the chance to watch his daughter Isemay grow up, and to grow old before she does. After over a thousand turns around Halla in service to his celestial creator Vaka Aster, hasn’t he earned it?

But rumors have spread across the three kingdoms of a usurper calling himself His Holiness—another celestial who’s come to Vinnr to challenge the dominion of Vaka Aster…
Ulfric knows war is coming. He’s seen it before. And though he wishes to be free of his duty, his curse, when his family is taken from him to be used as pawns in the celestials’ games, he and his Order of Knights are forced once again to face danger and death.

And for what?
In a Cosmos ruled by five celestials who show their creations no loyalty, or mercy…
What does Ulfric owe them?