Kingdom of the Star Queen by S. L. Harpel 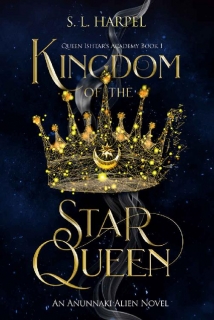 In the dark, you find yourself.
-Ishtar, Goddess of Creation, Star Queen of the Lesser Kingdom
Humans have lived in ignorance for thousands of years. With the rising of the Second Moon, truth is revealed.
The original gods, the Annunaki of Nibiru, seeded our race here on earth for one purpose only—to mine the golden substance that keeps them immortal.

Throughout history, cultures took the meaning literally, considering gold a sacred treasure. They never imagined that the life-giving substance our creators referred to resides in human blood.
Chieko lives in a future where everyone has a purpose: to serve our Nibiruan creators, who look down on us from their home in the heavens. In return, they gave us peace, stability, and safety. In this new world, everyone had a job, a task, a goal—everyone, that is, except for Chieko.

Daughter to a mixed-race union in the Lesser Kingdom where the Star Queen rules with an iron fist, her very existence is treasonous.
She is a mistake, a shameful result of thoughtless action, and something to be hidden away until the day she dies.
Or at least that’s what she thought…