Kin or Country by Paul Alster 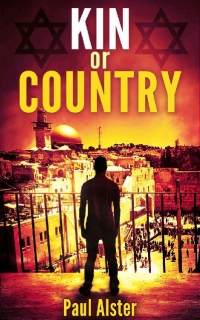 Civil war is drawing closer. A fierce political battle engulfs a once-in-a-lifetime referendum.
Is a new era about to begin?
Israel, 2048. The Ultra-Orthodox now form the majority among Israeli Jews. The country has changed rapidly in recent years to reflect their religious values and the new status quo.

On the 100th anniversary of the establishment of the state a referendum is called to decide whether to separate into two independent nations: one religious, the other secular.

The fate of Israel will be determined by its own people, but foreign powers have their own reasons for seeking to influence the outcome of the vote.
Against the backdrop of a no-holds-barred political campaign and with the clock ticking fast towards the day of reckoning, a man’s body found in the Jerusalem hills seems initially of little consequence—until his identity is revealed.
Could this discovery impact the fate of the entire country?