Killing Jericho by Will Harker 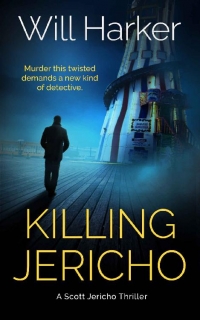 Fresh out of prison, former Detective Constable Scott Jericho is a desperate man.
Disgraced and penniless after his assault on a violent suspect, he is forced to seek refuge with the fairground family he once rejected. Now, troubled by his failure, Jericho’s brilliant mind stagnates.
That is until a series of bizarre murders reawaken his interest. Men and women with no obvious link to each other are being ritualistically slaughtered.

Slaughtered in ways that recall an old legend of the Jericho Travelling Fair.
Now, in a race against time, he must unpick the threads of a baffling mystery. But as his investigation unfolds and the corpses pile up, a shocking truth awaits him. A revelation that will test not only Jericho’s intellect but challenge the very core of his morality…