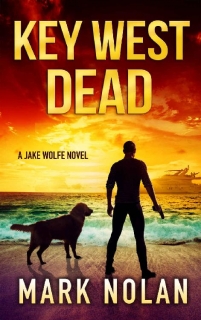 When Jake Wolfe attends a wedding in Key West, a mysterious bomb-maker plots to kill the newlywed couple with an improvised explosive device hidden on board their sailboat. The criminal’s manifesto reveals he will continue relentlessly targeting sailboats and motor yachts throughout the Florida Keys, while demanding 30 million dollars in ransom from the Monroe County government.

Jake volunteers to search marinas with his adopted IED-sniffing war dog, Cody. Together, they follow the twisted trail of an elusive killer whose merciless attacks have stunned the Florida Keys and put fear into the boating community, local residents, and visiting tourists.

Many innocent lives are at stake, along with the potential loss of several billion dollars in tourist income that would devastate the Florida Keys economy and cause mass unemployment and homelessness. With the islands under constant attack and every boater a suspect, the chase is on in a wild race against time, and the clock is ticking toward a final heart-stopping confrontation that will bring Jake face-to-face with death.
Will Jake and Cody be able to hunt down the criminal and stop his bombing spree before he detonates “the big one?”