Keep Me In Sight by Rachel Blackledge 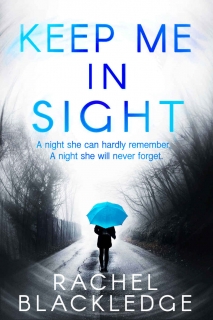 These three words jolt Brynn back to the big boozy night she spent with her boyfriend, Dan, the very same night his ex, Erin, happened to show up. Erin says something terrible happened that night. Dan says he never touched her. Trouble is, Erin has evidence to prove it.

Brynn can vouch for him though. She was there that night she can hardly remember, but will never forget. As Brynn pieces together her fractured memories, lost that night at the bottom of a bottle, she faces the horrifying possibility that maybe Dan isn’t completely innocent. Maybe he’s guilty as charged. Brynn is determined to find out what really happened that night, however gut-wrenching, but as she inches closer to the truth, she begins to wonder: Who is the predator? And who is the prey?

Gia knows. She’s a psychic who turned her back on her ability long ago, after she failed to prevent a terrible tragedy. As her gift floods back to her, can she learn to trust herself again before it’s too late? Or will her painful past hold her back from saving someone’s future…and quite possibly his or her life?