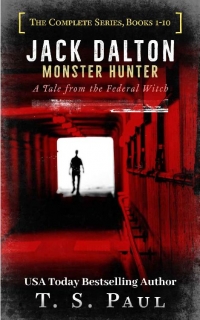 In 1914 the world changed. History changed. Magical and Paranormal creatures emerged from the veil and now live among us. Monsters that we once thought mythological were now a danger. Law enforcement as a whole were in trouble. How do you keep a Vampire or Were creature in jail? Who or what agency is responsible for ghosts and goblins? Jack Dalton of the FBI is. He’s J Edgar Hoover’s go to man for all things magical. He’s the FBI’s Monster Hunter.

#1 – Jack Dalton, Monster Hunter
In 1914 the world as we know it changed. Races of creatures came to be known as Paranormals were found to be living side-by-side among regular humans. Magic is real an Vampires do exist.

After four long years of grueling work, Cadet Jack Dalton is graduating from the FBI Academy. He unsuspectingly is called before not the superintendent of the school but J Edgar Hoover himself! His new Assignment? Take over and run the new Magical Division of the FBI. It sounds like a big job and major commitment. Too bad he only has one Agent under his command and that Agent is himself!

#2 – Jack Dalton, Monster Hunter
The world changed. Those that were hidden can now be seen, and humanity is frightened.

The year is 1959, and Jack Dalton is the new Director of the FBI’s Magical Division. It’s his job to police the new breed of Paranormals loose inside the United States. But how is a lone human going to do that? What sort of moxie does it take to load your guns and charge into battle against creatures that even the Gods fear?

If it bleeds, it dies. Prepare yourself for the universe’s newest action hero.

#3 – Jack Dalton, Monster Hunter
There are monsters among us.

I have a new assignment taking me North to Maine. The FBI wants me to establish better relations with a Coven of Witches living there. The woman I am supposed to meet is named Marcella Blackmore. I have heard about her. Powerful, mysterious, dangerous.

I will meet with her because that is my mission. Courage and dedication to duty is what I live by.

But I reserve the right to be afraid.Bigfoot, is he real? Folks in Northern California seem to think so. It’s my assignment regardless. Huge tracks have been spotted near sites incident of sabotage. Mr Hoover himself thinks it’s important so once again I’m off to find out. What I find in the woods will come as a huge surprise to both the Government and me. But will I survive to report it?

Part of the Federal Witch Universe series of books, Jack Dalton gives insight into the history and mythology of the books.

#4 – Jack Dalton, Monster Hunter
Working for the FBI is one thing. Working for a quasi-secret branch of it is another. What happens when members of your own organization don’t recognize you?

I am the one and only, FBI Agent in the Magickal Crimes division. That confuses some of my fellow Agents, but I can deal with that. Harder to cope with is the increasing monsters sightings that keep me traveling constantly.

Dealing with Government bureaucracy is not something I’m comfortable with. Especially when a sea monster is terrorizing the New Jersey shore. Trying to piece together clues, dealing with corrupt law enforcement, or just trying to get along with the locals, I am busy and anything but bored. Outnumbered, sometimes outgunned, backed by inexperienced and skeptical help, all I can do is my best.

It is exciting and challenging.

Either the FBI or the monster is about to become fish food. I just have to decide which one comes first.

#5 – Jack Dalton, Monster Hunter
Jack Dalton was raised by Werewolves and thought he knew all there was to know about the species.

He was wrong. A rogue is loose in St Louis and he’s the only one the Government trusts to stop him. Along for the ride this time is a mysterious helper names Robert Moore. He’s supposed to be an expert on how Weres think but Jack is beginning to think he’s a spy. It the both them don’t catch or kill the rogue human-Were relationships could be set back decades. This mission is a race against both time and politics.

But Jack is a Monster Hunter and catching Monsters is what he does best.

Ghosts are not supposed to exist but I’m on my way to Springfield Illinois to hunt one down. Strange occurrences have plagued the town for several years.

The local residents think it’s former President Abraham Lincoln that haunts the town. Now a political hot potato, my boss J Edgar Hoover has assigned me to personally either find or stop the ghosts if they exist.

#7 – Jack Dalton, Monster Hunter
It’s not who I am that matters, but what I do that counts.

My name is Jack and I’m a monster hunter.

J Edgar Hoover himself gave me this job and I intend to do to the best of my ability. In 1914, monsters know as paranormals, were found to be living among us as regular people. Treaties were made, reservations created, and wars were fought. In the United States you either joined some form of Government service or kept your head down. There are good people and there are bad people no matter what kind you are, human or paranormal. My job is to police the paranormal. But I’m one man in an entire country. How much good can I do?

In Jack’s seventh adventure he finds himself in Nashville, Tennessee. A group of very important paranormals are missing and if he doesn’t find them, it could mean war!

Hunting down Bigfoot was a bust but now I’m on the trail of something scarier. Quetzalcoatl is supposed to be a myth but when thousands of the creatures invade a small Nevada town I’m the only one that can stop them. Or can I. This might be my greatest challenge yet!

The Jack Dalton, Monster Hunter series is serial fiction. It’s the sort of material that was once found in old fashioned pulp or genre magazines. Each short work is a complete story with both a beginning and end. They are the Adventures of a lone FBI Agent chasing down the evils of the world. Like episodes of a television program each book is a single part of his life. Ten books in all the series shows the beginnings of the organization later chronicled in The Federal Witch books.

#10 – Jack Dalton, Monster Hunter
Jack Dalton is back in action in an all new adventure.

Vampires are really rare inside the United States. But one seems to be at work in Washington, DC. Vamps are monsters and that’s his job. Sidetracked by both the local FBI and police forces Jack has to figure out who to trust. Local police or the Vampire he works for?