It’s Over or It’s Eden by Rebecca M. Zornow 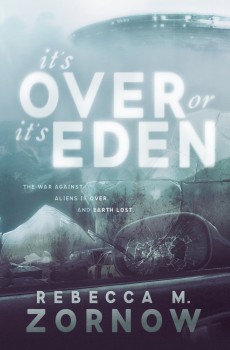 The war against aliens is over. Earth lost—and humans are nearly extinct…

Arwen Cruz watched her parents, brother, and sister die in an endless war. As the last surviving soldier in her battalion, she staggers out of a bombed-out military base and heads north. Arwen’s ready to leave the alien strongholds—and the lost cause of fighting them—far behind.

She makes it to the deadly wilderness of the Rocky Mountains only to battle starvation instead of invaders. Marah Bennett finds Arwen and suggests she join her small, secluded group—a cult that split from society long before aliens arrived. Arwen accepts, but quickly realizes she doesn’t belong—and escaping during the harsh winter is impossible. While living amongst the cult, Arwen discovers a dark secret—a key to reviving her planet—if she can survive long enough to uncover it.