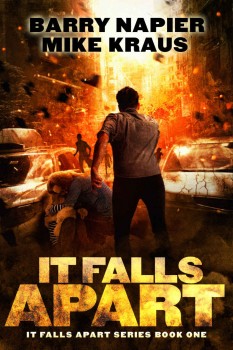 Where will you seek refuge when the world unravels?

A routine coast guard interception in the waters off Manhattan goes horribly wrong.
An NYPD beat cop finds himself surrounded by bodies as a mysterious illness spirals out of control.
A daycare worker fights to protect her wards against the horrors lurking outside her door.
Two unlikely allies will unite in the face of overwhelming odds as their country falls apart around them.

It’s a quiet day on his beat when NYPD officer Paul Gault finds himself on the frontline of a new, never-before seen disaster. Bodies drop like flies in the streets as panic descends on the city.

When he meets daycare worker Olivia Foster, the two must battle against not only the disaster but humanity itself to make it out of the city so that they may find some semblance of safety – if it still exists.

As the unlikely duo attempts to flee the chaos and destruction, one man watches the destruction with frustration and regret, knowing all too well that the worst is yet to come….