Into The Fire by Cate Clarke 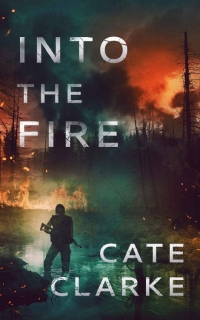 Fresh off the rescue of her daughter from the clutches of a Russian terrorist, Diana Weick’s problems are far from solved. Upon her escape, Taras Kushkin managed to take her ex-husband Rex Tennison captive while maintaining his grip on his other hostage, a previous member of Diana’s SEAL team. And there seems to be a suspicious relationship forming between Kushkin and enigmatic hitman, Alek Fedoruk.

Diana is recruited by MI6—for her first-hand experience and knowledge of Kushkin— in an attempt to stop him from selling a military combat drone to a Saudi Arabian air force official. Someone else tries to recruit Diana for her skills as well—a group calling themselves the Readers, an organization of ex-soldiers and SEALs who oppose anything to do with the United States Military.

But with Rex in Kushkins’ hands, the Readers preparing for some type of unknown brutal attack, and the MI6 keeping information from her, Diana is unsure of who to trust. These suspicions only continue to grow when Dominic Ratanake—the man who recruited and trained her in the SEALs—seems to be dropped in the middle of it all. And she’ll have to figure it out soon if she wants to save Rex and keep this weapon of destruction out of the hands of the nightmares closing in around her.