Interviewing The Dead by David Field 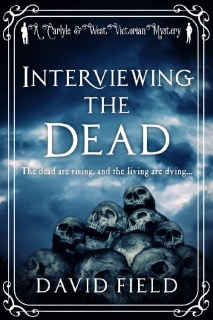 Should you be afraid of the dead – or the living?
London, 1892
Over two hundred years ago, in 1665, a mass grave was dug to house the hundreds of corpses who fell victim to the Black Death. When Aldgate Underground station was extended, the workmen discovered the grave and unceremoniously dumped the bones, to make way for the new track.
Now, a renowned spiritualist is claiming the dead are rising to punish Londoners.

Matthew is at a loss and turns to local doctor, James Carlyle, for answers.
Carlyle and West have very different views on science and religion, but they decide to work together to get the bottom of the mysterious deaths.
Has a curse really been put on London? Have the dead risen from their graves?
Or could a serial killer be loose in the city…?