In The Shadow by Lily Campbell 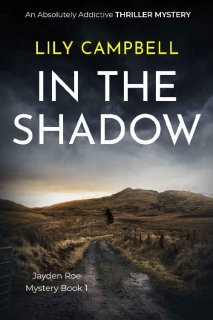 Everyone knows the Goldsteins are untouchable.
Private Investigator Jayden Roe is used to covering up his clients’ dirty work. At constant odds with the police and his arch-rival Detective Hector Piers, Jayden goes to great lengths to keep his past spotless and his business dealings shrouded in secrecy.

But when he’s hired to help the shadowy and enigmatic Matthew Goldstein, a wealthy man known only as ‘The Prince’, Jayden soon finds himself caught up in a dangerous world of kidnappings and murder. Jayden knows there’s only one way to make a man like Goldstein trust him – to become a monster himself.
Detective Hector has never given up searching for a way to put Goldstein behind bars. He knows deep down that Matthew Goldstein was responsible for his sister’s murder. But with Jayden’s constant meddling, he grows ever-more frustrated at his former friend’s backstabbing.

Fighting to stay one step ahead of his rival while orchestrating his carefully thought-out plan, Jayden infiltrates Goldstein’s closest-held secrets – all while becoming more entangled in his web. Will the elusive Prince ever face justice? And what will happen when Jayden and Hector finally come face to face?