In The National Interest by J Harvey Barker 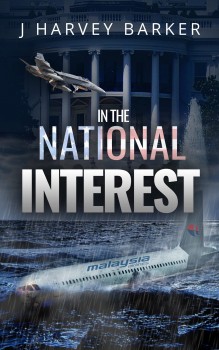 On March the 8th 2014 at 12:42 AM Malaysian Airlines Flight 370 took off from Kuala Lumpur to Beijing disappearing from its scheduled Flight. Air Crash investigators Curt Joyner and Kim Doh are tasked with uncovering the facts behind the mysterious disappearance. They are thwarted in their efforts at every turn by a clandestine operation instigated by someone named “The Protector”.

If the truth of the matter were revealed the people of the United States and the world would lose faith in the Presidency and his advisors. Anarchy would ensue. Paramount to the investigation is the location of the missing aircraft. Curt and Kim travel from Asia to the Indian Ocean.

Revelations there send them through Europe on their quest to uncover the truth. The protector of the United States President takes it upon himself to use any means possible to see that this information never gets out. Follow our investigators as they unravel seemingly unrelated events to uncover the truth behind the cover-up.