In the Jaded Grove by Anela Deen 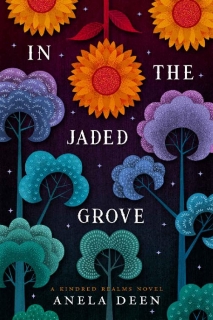 Simith of Drifthorn is tired of war. After years of conflict between the Thistle court and the troll kingdom, even a pixie knight known for his bloodlust longs for peace. Hoping to secure a ceasefire, Simith arranges a meeting with the troll king—and is ambushed instead. Escape lies in the Jaded Grove, but the trees of the ancient Fae woodland aren’t what they seem, and in place of sanctuary, Simith tumbles through a doorway to another world.

Cutting through her neighbor’s sunflower farm in Skylark, Michigan, Jessa runs into a battle between creatures straight out of a fantasy novel. Only the blood is very real. When a lone fighter falls to his attackers, Jessa intervenes. She’s known too much death to stand idly by, but an act of kindness leads to consequences even a poet like her couldn’t imagine.

With their fates bound by magic, Simith and Jessa must keep the strife of his world from spilling into hers—except the war isn’t what it appears and neither are their enemies. Countless lives depend on whether they can face the truths of their pasts and untangle the web of lies around them. But grief casts long shadows, and even their deepening bond may not be enough to save them from its reach.