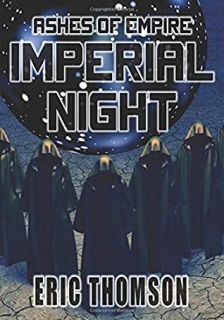 One tiny spark of civilization remains: The Republic of Lyonesse, tucked away at the end of a wormhole cul-de-sac. Yet that last bastion could suffer the same dire fate.

When the late empress unleashed the Four Horsemen of the Apocalypse on her crumbling realm, Lyonesse escaped War and Famine. However, the Pale Rider, carrying pestilence and death, still roams the wormhole network, seeking to finish off what the Imperial Retribution Fleet missed decades earlier, and he has finally found the entrance to the Lyonesse branch. What about the White Rider who brings deceit and the worship of false prophets? Perhaps he is already on Lyonesse, undermining what Jonas Morane so laboriously created.

Will the Navy’s tiny, decrepit fleet stop plague ships from reaching Lyonesse while Morane and his ally Sister Gwenneth keep the fledgling republic from turning on itself?

Or will Lyonesse join the rest of humanity in a long imperial night, one which might never end?