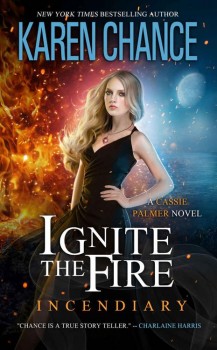 Cassie Palmer is the Pythia, chief seer of the supernatural world. John Pritkin is a half demon and a legendary war mage. Mircea Basarab is a first-level master vampire and the general of the World Vampire Senate. Each is formidable enough alone. But they recently discovered that, together, they are far more than the sum of their parts. With their power combined through a perilous spell, they are the closest thing left on Earth to one of the ancient gods.

That comes in handy considering that the old gods are exactly what the supernatural community is currently fighting. But now, their triumvirate has been torn apart. Mircea and Pritkin are lost in Faerie, with Mircea pursuing a personal mission five hundred years in the making. Meanwhile Cassie finds herself facing down an ancient adversary on her own. To survive, the three must find a way to come together, even worlds apart, and take their union to a new level.