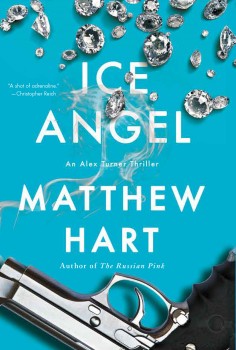 In this explosive sequel to The Russian Pink, Alex and Lily are thrust into a murderous cat-and-mouse across the Arctic diamond fields, dodging Chinese assassins while at the same time struggling with the personal betrayals that torment their passionate affair.

Alex Turner and his treacherous lover, the Russian diamond thief Slav Lily, are back on the hunt. An American prospector is murdered in the great diamond field of northern Canada—a magical landscape of pristine lakes and granite ridges and scarlet vegetation.

The U.S. government fears that the Chinese billionaire twins who suddenly control the dead prospector’s company are seeking a toehold for their government in this vital northern region.

As we race across the globe with Alex and Lily, Hart keeps a heart-bounding pace with lethal plane chases across the diamond-rich Barrens and a battle between the scheming twins and Mitzi Angel, the murdered prospector’s daughter. All the while, The Ice Angel delves into the dark realpolitik of America’s strategy while untangling the Byzantine motives that drive the diamond trade.