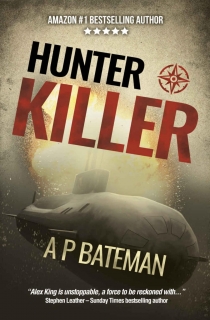 It had been a well-orchestrated defection when King put a Russian bio-weapons scientist on a British submarine under heavy gunfire.

But he should have checked.
Should have checked that the asset wasn’t contaminated.
Tragically infected with the biological agent she was smuggling to the West, King has been burdened not only by her fate, but of the one hundred and eighteen men onboard the submarine when it disappeared.
Aurora is the world’s foremost green energy pioneer and operate an R&D facility onboard a ring of former oil rigs anchored in the Barents Sea.
Now a UNESCO green sanctuary, no military presence is permitted within an area the size of France.
Aurora has discovered the sunken British submarine and a neutral consortium has been contracted to salvage the vessel and tow it to the Faroe Islands, where the Royal Navy will take possession under the eyes of the world’s press.

With cutting-edge technology, weapons and a terrible secret on board, King is sent to defend Britain’s interests, but soon discovers foreign agents have a more deadly agenda.

The Parasite and Other Tales of Terror by Arthur Conan Doyle

Sorry Can’t Save You by Willow Rose

The Cabinets of Barnaby Mayne by Elsa Hart