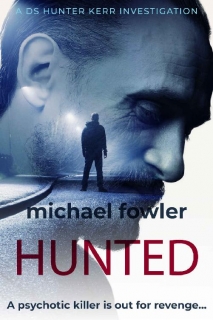 A killer from Hunter’s past is hell-bent on revenge…
When psycho killer Billy Wallace was given a life sentence for the brutal killings of three retired detectives and the attempted murder of Detective Sergeant Hunter Kerr’s father, eighteen months ago, Hunter thought that the gangland thug’s reign of terror was over.

But then, during a hospital visit from prison Billy escapes, vowing to eliminate both Hunter and his father.
Forced into hiding with his family, on the island of Sark, Hunter thinks he has escaped Billy’s clutches.
Until a series of mysterious events on the island leads him to believe that Billy has found their safe house.
Can Hunter capture Billy before he strikes again? Will he put Billy behind bars once and for all?
Or will Billy track down Hunter first…?