House in the Woods by Jessica Aiken-Hall 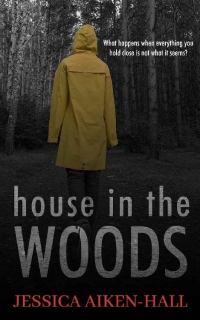 What happens when everything you hold close is not what it seems?
After finishing her second year of college, Molly Jackson is ready for a relaxing summer. Her only task is to look after her mom, who has been diagnosed with dementia. When her mom goes missing, Molly enlists the help of her older brother. As the search ensues, Molly stumbles upon a flyer for a missing woman from twenty years ago that bears an uncanny resemblance to herself.

Molly can’t ignore the nagging feeling telling her there’s more to the woman’s disappearance than what’s being reported. When she learns her brother and the missing woman were high school sweethearts, she knows she must keep digging. Something is forcing her to push forward and reveal the truth about why Molly feels such a strong connection to the missing woman.

With more and more at stake, Molly scrambles to solve this mystery before it’s too late. The life she knew hangs in the balance as clues come to the surface. What she doesn’t realize is she might uncover some truths she’s not ready to accept. Will she sacrifice everything she has for the chance to find out what really happened?