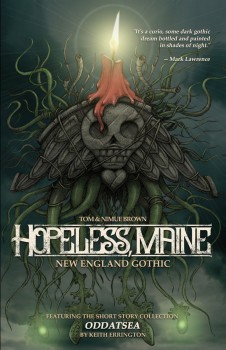 The Hopeless, Maine project came to life as the collective dream/nightmare of Tom and Nimue Brown. It began as a graphic novel series set on a gothic island lost in time. Since then the creative family has grown and there are many who have come to play on this strange island and now will never leave. “The moon hadn’t risen, but starlight showed Annamarie the way. She saw well enough, and the island by night held no terrors for her. She had been running away to its wilder places for as long as she could remember.” New England Gothic is the story of Annmarie Nightshade, an orphan who becomes a witch on the island of Hopeless, Maine.

There are betrayals, heartbreak, and many dangers to overcome but there are also wonders, near escapes, and strange journeys. You will meet dark sorcerers, a mad inventor in a lighthouse, and the strangest familiar in the history of witchcraft.