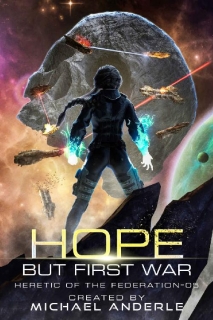 You cannot murder a person who never existed.
The story continues with, Hope But First War, book five in the Heretic of the Federation series, where the fights explode on Earth and for Dreth.
When the beast doesn’t get his way, that which remained hidden becomes needed.
Perhaps a bit early.

The Regime hasn’t fought the Witch and her teams and she is coming back mad as hell.
Perhaps quality can beat an over-abundance of quantity?
The best laid plans of both sides get crushed when one of them doesn’t play fair at all.
It’s time for Todd’s team to get up and get personal on Earth and may the best group of Hooligan’s win.

The Black Altar by Jack Conner

The Apollo Murders by Chris Hadfield