Honour Among Spies by Asad Durrani 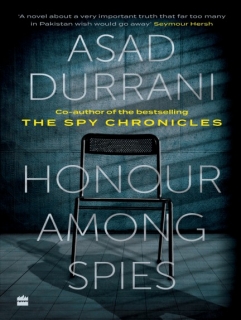 In May 2018, a book was published that set off a perfect storm in the intelligence circles in the Subcontinent, and made people in the spy community sit up around the world. The Spy Chronicles came out at a time when the relationship between India and Pakistan had been going from bad to worse, but what made it unusual was that two of its authors, A.S. Dulat and Asad Durrani, co-writing with journalist Aditya Sinha, had headed their respective spy agencies Dulat had been chief of Indias RAW, and Lt Gen. Durrani of Pakistans ISI.

More remarkably still, these former chiefs of two of the most powerful spy agencies in the world, which were also bitter rivals, discussed the necessity for peace, and how the relationship between their two countries could be improved. The fallout of the book would result in Lt Gen. Durrani, a man who has been spoken of as one of the clearest and sharpest thinkers to head the ISI, being put on the exit control list and having his pension revoked. Honour Among Spies is a fictional account of a spy who is sent out into the cold, but one that reflects all too accurately the predicament of a distinguished officer fighting to protect his reputation. Woven into the novel is a throwback to another famous incident the raid on Osama bin Laden, about whose hideaway and the raid itself Lt Gen. Durrani had made some prescient comments. These and other elements come together in this taut battle of wits that takes forward, in a way, the narrative of The Spy Chronicles.