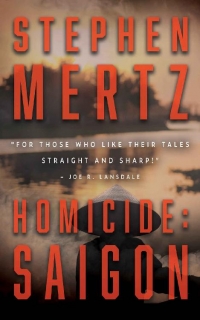 SAIGON, 1970.
Meet Cord McGavin, lone wolf investigator assigned to a special operations unit of the US Army’s Criminal Investigation Division. McGavin’s beat: the mean streets of this sprawling, violent metropolis ravaged by war. From its wealthy bastions of power, paid for by corruption and profiteering, to the alleys and waterfront shadows where human souls are bartered, deception is the name of the game. The threat of death is never more than a heartbeat away.

McGavin has his hands full. The brass thinks he’s too damn cowboy. Viet Cong assassin teams are operating openly across the city. He’s taken on a deadly coalition about to flood the streets of America with heroin. And oh yeah, there’s McGavin’s beautiful wife Kelly, a Pulitzer-class photo journalist newly arrived under an assumed name to document her husband’s war…