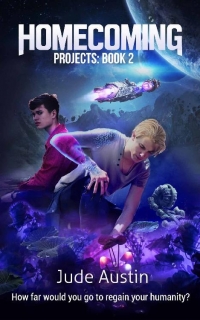 After escaping the laboratory where he was imprisoned by the scientific mega-corporation GenTech, former college student Kalin Taylor, aka Kata, wants just one thing: to go back to his homeworld of Trandellia with his friend Tau and forget all about what happened. Forget about being imprisoned and mutated, forget about GenTech’s attempts to break and sell him as a piece of livestock, and above all, forget the tortures he suffered at the hands of some of the scientists.

Too bad life has other ideas. Everyone who meets him, including his own rulers, see him as nothing but a weapon to be turned on their enemies. The price of his return to Trandellia is simple: go to the entirely lawless world of Atthiras, and find the child of a foreign ambassador who went missing there five years ago.

Betrayed at every turn, surrounded by people whose only thought is to turn him to their own cause, Kata will soon have to make a choice about who to trust. If he picks the wrong person, he and Tau will be dead or re-enslaved, and this time, there’ll be no escape.