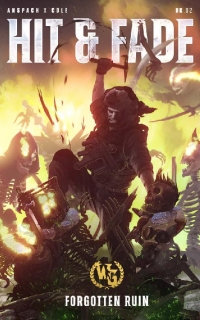 For the Rangers, the best defense is always… more offense.
As an overwhelming army of skeletons, wraiths, ghouls, and other dark creatures—all serving a powerful undead sorcerer—advance against Forward Operating Base Hawthorn, the Rangers must now do what they do best: go on the extreme offense.
It’s time to Hit and Fade. Attack, withdraw, and outmaneuver the enemy.

PFC Talker, attached to the weapons team section of a Ranger recon patrol led by Captain Knife Hand, recounts the harrowing attempt to destabilize this surreal and horrific nightmare force with everything the snipers, master breachers, and stone-cold killers of the Ranger regiment have in their bag of lethal tricks.
Abating, channelizing, and leading the enemy into a series of devastating traps involving everything from kinetically violent ambushes to immensely explosive crater munitions, the Rangers strike at the enemy as death personified, fading like ghosts only when the dead are dead once again.

When facing Rangers, even nightmares are afraid.