Heroes of Perpetua by Brian Clopper 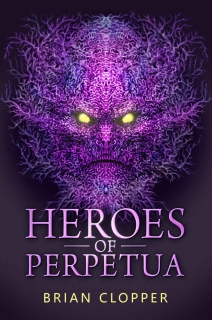 Baron Orb demands every species in Perpetua suffer a magical tax, thus grounding dragons, stripping orcs of their frenzy, and imprisoning abducted ghosts.
Powerful magic buried in three nerdy middle-schoolers is the realm’s only hope. Each has trouble interacting with their peers in the real world let alone the outlandish.

Lou Walker withdraws into her father’s comic book collection to cope with his death. Nelson Rivers avoids physical touch and eye contact, only able to summon empathy for nature and not his fellow homo sapiens. Hugo Hammersmith immerses himself in tech and video games and rarely interacts with others except for his baby sister. He’s aces with her.
An attack by mysterious shadow creatures and a visit by a spell-casting, hydration-obsessed golem toss them together for the first time. These misfits are sent on an epic adventure where they must reach out and trust one another if they hope to have a chance of defeating the horribly wretched Baron Orb.