Her Rival by Emma Tallon 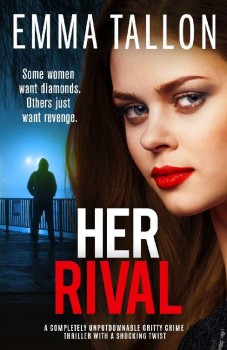 Scarlet Drew is new to London’s criminal underworld, but she’s hell bent on making a name for herself as joint head of the family firm alongside her aunt Lily. But when Scarlet finds herself alone with a rival business owner at a black-tie event, she is little prepared for what happens next.

Determined not to let the drunken lech get away with his crime, Scarlet hatches a plan for revenge – she’s going to steal his most valuable asset and put her name on the map. But as she gets to work, she fails to notice a silent stranger watching her every move. Someone knows exactly what she’s up to, and is plotting their own way to get their hands on the priceless goods.
Face to face with a new enemy, Scarlet fears the Drews may have finally met their match. With the whole family at risk, it’s going to take everything they have to stop their empire going up in smoke. But will everyone survive the fight?