Her Deadly Touch by Lisa Regan 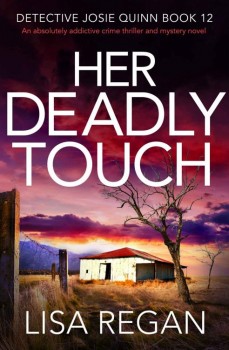 The woman is kneeling at a gravestone, her hair blowing in the breeze, a bunch of wilting yellow daffodils on the grass beside her. Her eyes are fixed on the ground and her mouth is parted in a silent prayer. But the wax dripping from her cold blue lips means it’s already too late to save her…

On her first day back with the Denton PD after a major trauma, Detective Josie Quinn is on the hunt for a missing woman, Krystal Duncan, the mother of one of five children killed in a devastating school bus crash. Hours later, Josie finds Krystal’s body beside her daughter’s grave, her lips sealed together forever with wax.

Forensics match the wax to one of the candles lit in memory of the sweet little souls who died, giving Josie her first lead to a support group made up of the parents who lost children in the crash. Painstakingly dissecting the lives of these grieving couples, it’s clear to Josie that each of them is hiding something about the day of the accident—but whose secret is worth killing for?

The case takes an agonizing turn when the body of another young mother is found near the site of the bus crash. Someone connected to the accident is out for revenge. As the members of the support group are picked off one by one, every second counts for Josie to save the lives of these loving parents who have already suffered the loss of those they treasured most…