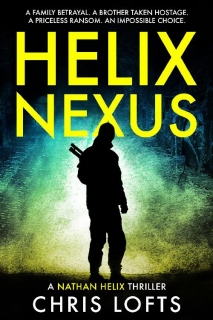 WHEN MAJOR NATHAN HELIX’S commanding officer plunges 55 floors to his death, everybody agrees that Helix is the obvious choice of investigator.
CONFLICT ERUPTS WHEN the Home Secretary intervenes. Helix refuses to stand down and chooses suspension over desk duty. Determined to discover who murdered his friend and mentor, he joins forces with his cyber-genius brother Ethan.

CHAINS OF EVIDENCE point back to a celebrated case, the pinnacle of Helix’s career, a crime centred around politics and power. The case is closed and Helix wants it left that way. But long lost family links lurk in the shadows and blood is thicker than water. He’s not the only one with a different version of the truth.
EXPLOSIVE NEW EVIDENCE demands the case be reopened placing Helix and the main prosecution witness, Doctor Gabrielle Stepper in the dock. The Home Secretary orders their arrest.

WHEN HE LEARNS who’s behind the leak and their lust for revenge, Helix knows he’s waging a war on two fronts. Pitted against that and the system he thought he was part of, he has to find Gabrielle. This time, it’s not just a fight for her reputation and his career, but a battle for their lives.