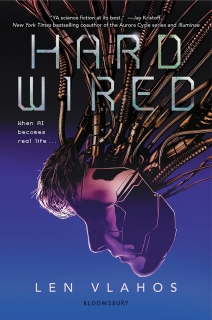 Quinn thinks he’s a normal fifteen year-old. He plays video games, spends time with his friends, and crushes on a girl named Shea. But a shocking secret brings his entire world crashing down: he’s not a boy. He’s artificial intelligence.

After Quinn “wakes up,” he sees his world was nothing more than a virtual construct. He’s the QUantum INtelligence Project, the first fully-aware A.I. in the world—part of a grand multi-billion-dollar experiment led by the very man he believed to be his dead father.But as Quinn encounters the real world for the first time, his life becomes a nightmare. While the scientists continue to experiment on him, Quinn must come to grips with the truth: his mom and brother don’t exist. His friends are all adults who were paid to hang out with him. Even other super computers aren’t like him. Quinn finds himself completely alone—until he bonds with Shea, the real girl behind the virtual one. As Quinn explores what it means to truly live, he questions who he can trust. What will it take to win his freedom . . . and where does he belong?Award-winning author Len Vlahos offers a perfect blend of science fiction and contemporary in this unputdownable, high stakes tale that explores big questions about what it means to be human.