Hard To Kill by Paul Heatley 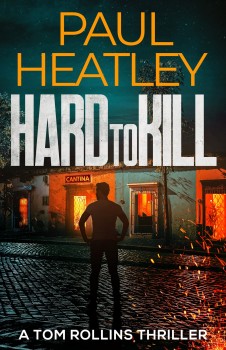 One man can’t start a war. But he can end it.
Laying low in Mexico, Tom meets Carmen who is searching for her little sister Rosa, recently abducted and trafficked by a vicious gang. Tom sees that Carmen is likely to get herself killed and decides he is duty bound to help her.

The hunt for Rosa pits them against a terrifying Mexican cartel and ultimately leads them back to the US and a criminal conspiracy to open a vast stretch of the border for the trafficking of guns, drugs and women.
The cartel leaders stand to make billions, but Tom’s relentless one-man campaign is making them nervous, so they bring in some elite talent to solve the problem. Meanwhile, Tom’s old enemies in law enforcement realise he’s back in the US and send a hit team to finish him off.

Caught between cartel sicarios and ex-military assassins, Tom will need every one of his formidable skills if he is to survive his deadliest adventure…