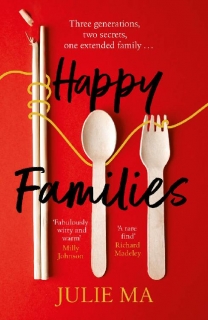 Amy is thirty-four and has just given up her glittering career in the big (Welsh) city to move back in with her grandfather, returning to work in the small-town Chinese takeaway where she spent her bookish and boring childhood. Why? That’s a secret she won’t tell.
Just like the secret of why her grandfather, Ah Goong, and her father, TC Li, haven’t spoken to each other in thirty years. Weirder still, they’ve lived in the same small flat about the takeaway for the majority of those years, with Amy’s mother Joan acting as their unfortunate go-between and buffer.

Now Amy’s parents have moved, leaving her in charge of looking after the old man. But then Ah Goong collapses in the street and Amy realises time is running out if she wants to play happy families again . .