Guided By Starlight by Matt Levin 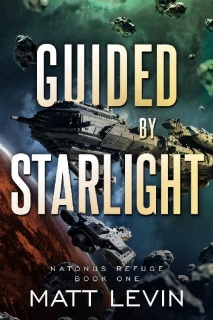 The last cryo vessel from fallen Earth has arrived in humanity’s farthest colonized star system. What the refugees weren’t counting on was over a quarter of their people—including the entire leadership—perishing in transit.
It falls to Isadora Satoro, a mere city councilor, to negotiate the terms of her people’s settlement in the Natonus System. But the talks don’t go as planned when the Union, the biggest political power in the system, denies them a home. Isadora must then turn to the system’s war-ravaged and resource-scarce outer rim, which means even bringing her teenage daughter out of cryo will have to wait.
Isadora can only thaw out a small crew to assist her. Navigating the perils of colonization, their strained political relationship with the Union, and the shadowy threat of nativist groups, Isadora and her team must make a new home for the survivors. Their decisions will forever alter the fate of the Natonus System and all its people—old and new.